Home » TikTok: ‘Nearby’ Feed Under Tests as Social Media Aims to Display Local Content for All
Entertainment

TikTok: ‘Nearby’ Feed Under Tests as Social Media Aims to Display Local Content for All


TikTok is testing a new feed for users to view the local content available near them, and it is called the “Nearby” feed that will focus more on its proximity’s availability for posts from users. There are two current feeds available on the app’s platform and include the For You page, famously known as the “FYP,” and the Following tab.

According to TechCrunch’s report, a company spokesperson confirmed the new feature available for users in the Southeast Asian region that is currently under testing for its use. The “Nearby” feed provides a new tab that users may switch to from the content available on their media consumption via the application.

It aims to focus on local content available in nearby locations or near a said user.

Switching to different feeds will display a floating text saying, “You are now in the Nearby feed,” and it reminds people that they are switching to another roster of content available near them. Going to the “Nearby” feed for the first time would ask users to allow TikTok to access the device’s location (if the user does not yet permit it) and prompt “Open Settings.” 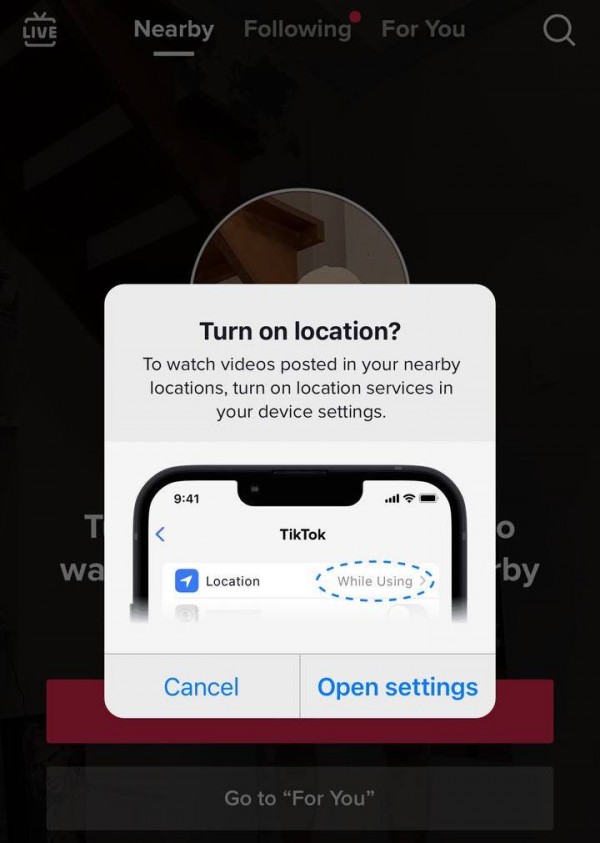 According to Matt Nevera, TikTok allows content creators to “put a location tag” on their videos and have it available in the new feed for user access and consumption.

There are three feeds available in TikTok’s Southeast Asia operations now, and it includes the “Nearby” feed being the first in the tab, followed by “Following,” and lastly, the famous “For You” page.

While Nearby focuses on location tagging and gathering information from a user’s site for its content offers, the For You page is best known for its AI-generated content from a person’s media consumption and interests.

The following page still focuses on accounts that a user follows on the platform.

TikTok and its Experience

One of the most famous social media applications is TikTok, and while the company started in trends and dance covers, it is now a platform where users share their experiences and daily lives with the public. Many influencers and content creators on the platform post important information for everyone, and it has become a source of facts and misinformation for the world to consume.

However, there are still significant trending videos that contain massive information for the world to know, and it mostly talks about the different products and publicly available things that TikTokers debunk for all. Recently, one of the most trending talks on TikTok is the use of Tampon, where content creators warn the public regarding its cancer-causing effects on women.

The good thing is that several experts are also on the platform or are speaking up against these alarms that cause a public panic after seeing them on the app.

It is unprecedented that TikTok grew to this extent from the public’s use, especially as it had previous disputes in its operations in the United States regarding its data and information. Now, the platform focuses on providing a “Nearby” feed for all and aims to bring more content closer to users, focusing on locations in the neighborhood.

This article is owned by TechTimes

ⓒ 2022 TECHTIMES.com All rights reserved. Do not reproduce without permission.

TravelPulse Podcast: How Business Travel is Bouncing Back