By Gina Martinez For Dailymail.Com

Police arrested two men after they allegedly robbed a Queens stripper at gunpoint in front of her children after she flaunted her cash and luxury swag all over social media.

Romel Catoe, 32, and 29-year-old Mathew Sanchez are in custody after targeting two unidentified exotic dancers in two armed robberies at one of their homes, the New York Daily News reported.

Police say the suspects plotted the heists after scoping out the strippers’ social media accounts – which had hundreds of thousands of followers – and where they regularly showed off their money, jewelry and expensive handbags.

In addition to monitoring the women’s social media activity, prosecutors say the men installed GPS tracking devices on their cars to track them.

Following their first successful heist, the cocky robbers returned to the home just nine days later for another robbery

Prior to the first armed robbery in January 2021, the men exchanged text messages that indicated they’ did not care’ if kids were in the home.

‘I’m ready thou like I’m ready ready,’ Catoe texted Sanchez ‘Are we getting this?’

During the first heist the men are accused of stealing $79,000- mostly in dollar bills that belonged to both of the women – and $100,000 in designer purses, including a Hermes and Christian Dior handbags.

That night prosecutors say the stripper happened to be Dominican Republic but her husband and young children were home and surveillance footage showed the husband zip-tied as he laid on the floor while one of the robbers wearing a mask points a gun at him. 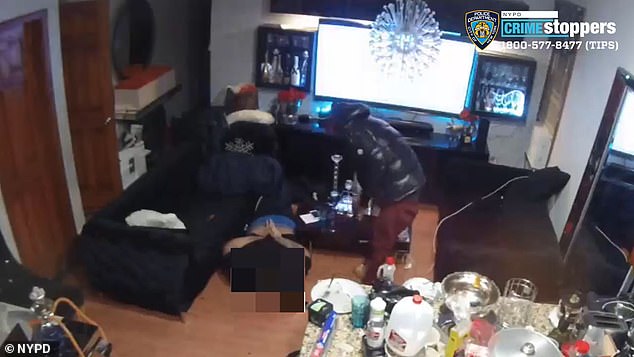 In the second robbery they ordered the stripper and her husband into the bathroom at gunpoint, where they were zip-tied, prosecutors said

Following the successful heist, the cocky robbers returned to the same home just nine days later for another robbery.

In the second robbery they ordered the stripper and her husband into the bathroom at gunpoint, where they were zip-tied, prosecutors said.

They also pointed guns at two children in the house in what prosecutors described as ‘terrifying tactics.’

But the second time around one of the children in the home was able to call 911 and when police arrived the men fled, leaving behind a cellphone police were able to use to connect them to the two robberies.

Prosecutors say that in between the two robberies the men swapped thousands of the smaller bills stolen for bigger bills at a bank near Philadelphia.