SteelSeries is arguably the best gaming audio manufacturer around thanks to its expansive lineup of headsets that just got more impressive with the new additions to the Arctis Nova line. Though the Arctis Nova line is exciting, SteelSeries is also entering a brand-new market: gaming speakers. Dubbed SteelSeries Arena, these new gaming-focused speaker system setups are available today from SteelSeries and major retailers. The Arena adapts the immersion of SteelSeries’ personal listening devices into a robust room-scale format that is available at three price points. And thanks to support with wired headsets and a new wireless mic, you don’t have to lose a step by switching to speakers for your competitive multiplayer games.

The Arena comes in three distinct setups. The most basic setup, the Arena 3, offers a pair of compact speakers for $130. Step up to the Arena 7 and you get a pair of speakers and a down-firing subwoofer to add deep lows to your audio setup. Finally, the Arena 9 is a complete speaker system that offers 5.1 surround sound via USB. It comes with two front speakers, two rear speakers, the subwoofer, and a central speaker with a pair of drivers.

All three setups feature both wired and Bluetooth connections, and the Arena 7/9 have reactive RGB lighting effects. The Arena 9 is undoubtedly the most impressive of the bunch thanks to its surround sound. SteelSeries says it’s the “world’s first USB 5.1 gaming speaker system with surround sound from a single USB connection.”

One of the standout features of the Arena speakers is that they support SteelSeries’ brilliant Sonar app, which allows you to customize your sound profiles. This includes fine-tuning the audio to fit your preferences for each of your favorite games by pinpointing particular sounds to focus on. Sonar boasts parametric EQ settings that SteelSeries tuned with gaming in mind, and the software is just as useful with the Arena speakers as it is with SteelSeries headsets.

It’s worth noting that though all of the Arena speakers work with TVs and consoles, the Sonar app is only available for PC, so the ideal buyers here are PC gamers who are looking to improve their desktop setup. That said, I tested the Arena speakers with my TV while playing PS5 and Xbox Series X and watching movies. I was mightily impressed with performance, even when connecting via Bluetooth and not taking advantage of surround sound.

Let’s take a closer look at each of three Arena models. 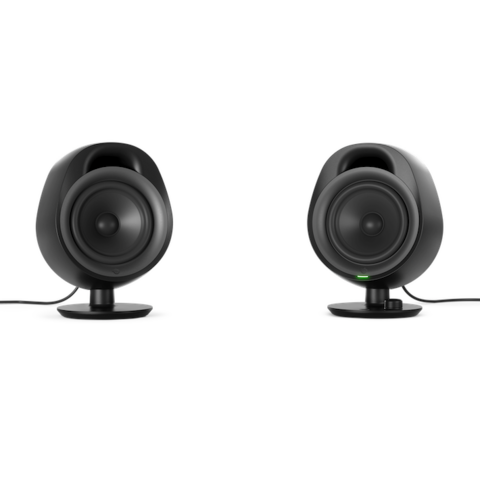 At $130, the Arena 3 is significantly cheaper than the other two setups. It comes with a pair of matching speakers, one for each side of your setup. These compact speakers are a bit different than the similarly sized ones in the other two setups. Though small, they make ample use of their real estate with 4-inch drivers. These cone-shaped drivers handle the entire audio range–lows, mids, and highs. I didn’t have the chance to check out the Arena 3 speakers compared to the speakers on the Arena 7/9, but each of the small speakers in those setups–which have 3-inch drivers–pack a big punch. You can connect a wired headset (any headset really) directly to the speakers for private listening as well. 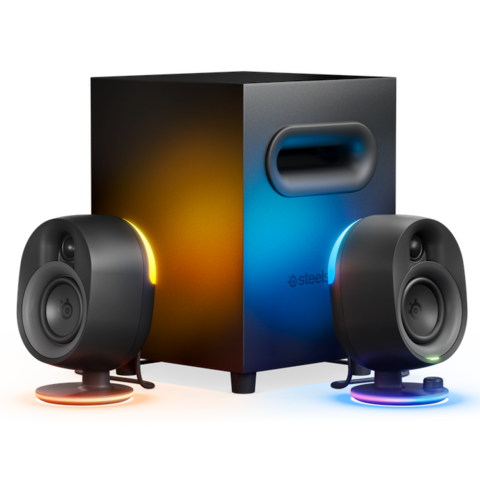 The Arena 7 is a three-piece setup that comes with a pair of two-way speakers and a subwoofer. The two-way speakers separate the driver from the tweeter. You get 3-inch drivers with each of the two speakers that handle mid-range sounds and 0.75-inch tweeters that purely hone in on highs. The 6.5-inch subwoofer has a down-firing design that really helps deliver clear, deep lows. After all, many of the most popular games have plenty of sounds that rely on bass, so getting a subwoofer (whether here or with a soundbar) can drastically improve your audio experience.

For some added style, the Arena 7 features “Reactive PrismSync RGB” lighting effects. The LED lights are located around the base and on the back of the speakers. The result is a dynamic and colorful display that really shines when you position the speakers close to walls and play in a dark room. There are four lighting zones that react to action on screen. The reactive lighting is exclusive to PC, but you can configure set lighting effects for consoles.

The Arena 7 has a wealth of connectivity options, including USB 2.1, Bluetooth, optical, and auxiliary. Once again, you can connect a wired headset to the speakers and easily go from speaker audio to private listening. 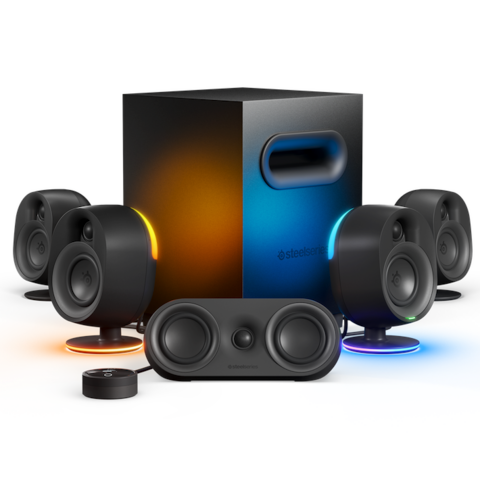 The Arena 9 takes the foundation of the Arena 7 and adds to it with a pair of wireless rear speakers and a center channel with two drivers. If you don’t have a large enough desktop to properly space out the speakers, it’s probably not worth opting for 9 over the 7, but there’s no denying that this setup offers phenomenal discrete surround sound via just one USB connection on PC. Compared to similarly robust systems with a lot of pieces, the Arena 9 is fairly pricey at $550.

The rear speakers, which have the same two-way audio design as the front speakers, can be mounted to the wall behind your setup. The center channel adds yet another duo of drivers that bridge the gap between the left and right speakers. Ideally, you place this speaker directly in front of your monitor. While the Arena 7 and 3 just have controls on the actual speakers themselves, the 9 adds a handy little control pod with a small OLED display. You can use the control pod to adjust audio levels and settings, change your connection type, and turn on 5.1 Upmix surround sound. The Arena 9 supports all of the same connection types as the other setups in the lineup, which gives you plenty of versatility.

At $550, the Arena 9 is a big step up in price from the $300 Arena 7. Surround sound is also a big step up from stereo sound, though. As someone who isn’t a big audiophile, I think the Arena 7 is a more than suitable option for those who want a gaming-focused sound setup for PC gaming. If you are used to surround sound and don’t want to go back, Arena 9 is the way to go. Since it can connect via Bluetooth, you can easily switch between playing audio through your monitor and a nearby TV.

Though the Arena speakers can quickly filter audio through a wired headset, if you want to listen through the speakers and chat, SteelSeries is also offering a $100 wireless mic. The mic wraps around your ear but doesn’t block your eardrum. It comes with three different hook sizes to fit all ear sizes and has a soft rubbery design to help make it comfortable for lengthy sessions. SteelSeries implemented its ClearCast noise-canceling tech into the Arena Wireless Mic, which is the same mic technology found in the company’s gaming headsets. Like the speakers, the mic is compatible with the Sonar app so you can tweak your chat levels to your liking. The battery life isn’t super great at 4.5 hours, but it can give you one hour of runtime on a 15-minute charge. The mic connects via a 2.4GHz USB dongle and comes with a USB-C adapter to support a wider range of devices.

This Week’s Free Game Is Live At Epic, And There’s A Cool Bonus Freebie