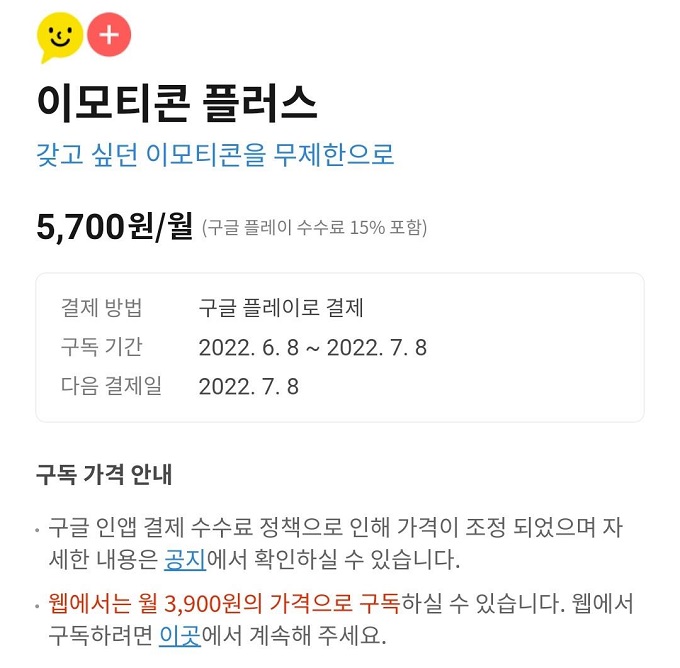 This image captured from the Android version of KakaoTalk shows a notice over the price hike of its paid Emoticon Plus subscription service citing Google’s new in-app payment commission policy.

In April, Google required all app developers selling digital goods and services on the company’s Play store to use its billing system and to remove external payment links.

Non-complying apps were not able to offer updates, and Google has warned it will begin to remove such apps from the Play store starting in June.

The move came despite South Korea’s Cabinet having approved a revised bill in March that would ban app store operators from forcing developers to use their own in-app payment systems.

The Android version of KakaoTalk was seen with a notice over the price hike of its paid Emoticon Plus subscription service, from 4,900 won (US$3.90) to 5,700 won per month, citing Google’s new in-app payment commission policy.

The notice also told users the service was available at a cheaper 3,900 won per month charge via its website while presenting an external link directing customers to the company’s website.

Kakao said it posted the notice on the external link in late May before Google vowed to remove apps with external payment links, saying Kakao needed to notify customers that there was a way to use the service at a cheaper cost.

Google’s Tensor 3 CPU, Samsung’s Exynos 1380 might be under development